This series of publications from our emerging nonprofit library unfolds ancient Vedic classical music in the light of meditation. It is a rare opportunity for a music lover, an artist or a spiritual aspirant to gain access to such meditative art treasures of the ancient world. The tradition of Sanskritic indigenous knowledge is well known for its seamless combination of art and music with meditation and spirituality. Naturally, the entire Vedic worship paradigm rests upon this exquisite tapestry that culminates with merging into bliss by reposing in lighted silence beyond the shades of beauty.

Our archive project searches out maestros, savants, chanters and adepts who are capable of reproducing the ancient mystique of the Vedic times for the modern seeker. Drawing upon esoteric Sanskrit texts and manuscripts, our monastic council of highly realized Vedic monks guides the conception, recording and production of these music projects. The monks oversee the authenticity of the material as from the hallowed indigenous tradition.

Indic classical music has an unbroken tradition and an accumulated heritage of centuries that has been traced back to the Vedic Sanskrit period. Pupils and maestros of Indic classical music recognize Sāmaveda to be the source of music. Both the well-organized classical music and the classical dance traditions consider Sāmaveda to be root of their melodies and rhythms. The unbroken oral traditions claim that during the flourishing times of Sāmaveda lineages (later than the R̥gVeda period that flourished in Āryāvarta, the landmass between Saraswati and Ganga rivers), music was held to be derived from Sāmaveda chants and intonations, and the form of music defined as Sāmagāna was prevalent which involved singing verses set to musical patterns.

The compositions were devotional and often used during community rituals and restricted to worship environs or Vedic fire ceremonies. As in R̥gveda, the hymns of Sāmaveda (saṃhitā) are composed with a liturgical purpose and ultimately aimed at revealing spiritual philosophy. Their metres shift in a descending order and form the repertoire of the Sāmagāna singer (udgātr̥). For example, all seven notes of the Karnatic rāga karaharapriyā are found in this Veda in the descending order. In this respect, Karnatic classical music is said to retain the traditional octave in congruence with the Sāmaveda heritage.

Legendary percussion virtuoso, Vikku Vinayakram playing on the baked clay pot accompanied by his grandson, the prodigiously gifted kanjira drummer, Swaminathan Selvaganesh. The musicians offered their compositions while taking audience with His Holiness Swami Vidyadhishananda, shown seated at the left.

Rāga-pravāha in Rāga Nattaikurinji and Ādi-tāla on a theme featuring the Lord of time, Shiva. Kumaresh Rajagopalan is on violin, Jayanthi Kumaresh is on vīṇā, and Trichy Krishnaswamy playing ghata or the baked clay pot.

Music and the Veda

The hymns of R̥gveda are known to be exquisite offerings to the gods through the vāņī, or the essence of speech expressing devotional thoughts through the vocalization of intonated mantra. However, the essence of these hymns is the musical rendering of those Rik sounds into Sāman by way of either intonated singing or music. The stylized singing of Sāman mantra is known as Sāmagāna (psalm songs).

Sāmaveda has far fewer verses than R̥gveda, but is voluminous due to the list of the chants and their modifications in the song form. Sublime expression of the Sāmagāna through voice or music is said to bear the power to replace rites and rituals, and is verily hailed as giving fulfillment to the heart. Sublimation through celestial music is deemed as a way to moxa or deliverance from the cycle of death and rebirth.

The music recordings presented here showcase the sublime creations by legendary, renowned and budding artists of Indic classical music. The artists were selected by His Holiness Swami Vidyadhishananda, the head monk of Hansavedas sangha and founding monk of Self Enquiry Life Fellowship. These meditative music conceptions were inspired by the traditional repertoire of Vedic rhythms and melodies as derived from the Sāmaveda chanting and Sāmagāna singing repository. The recordings are part of a preservation project undertaken by the nonprofit organization Self Enquiry Life Fellowship to record and archive meditative Vedic music and chants. Most of the compositions were recorded following long arduous review of musical notes and soundscapes. Discussions on the relationship between chanting intonations and rāga inflections played a pivotal role in creating the meditative mystique

Listen to Collection on iTunes 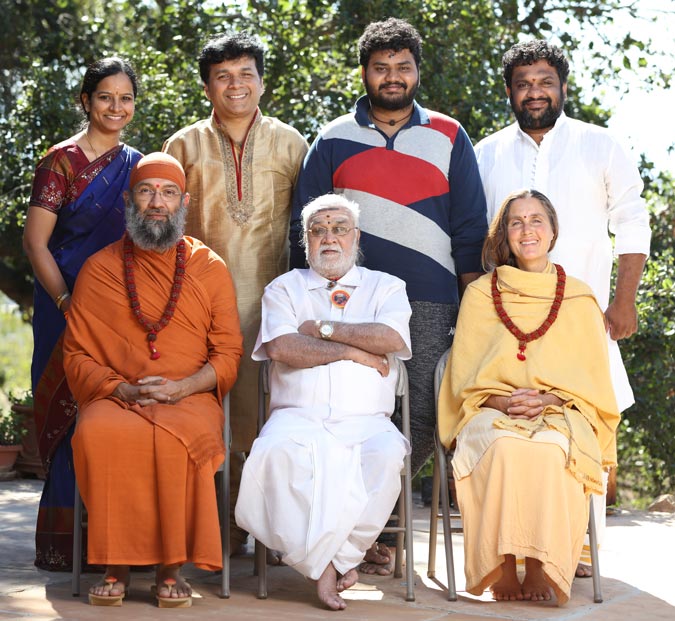 With your support we can bring to fruition enthralling music projects with selected artists, which would be otherwise not available. These publications are only available through hansavedas.org as per the Vedic holistic curriculum. Funds are needed for the project research phase, recording studio rental fees, mix engineering fees, online music hosting fees, Sanskrit textual research and translation, and whenever possible honorariums.