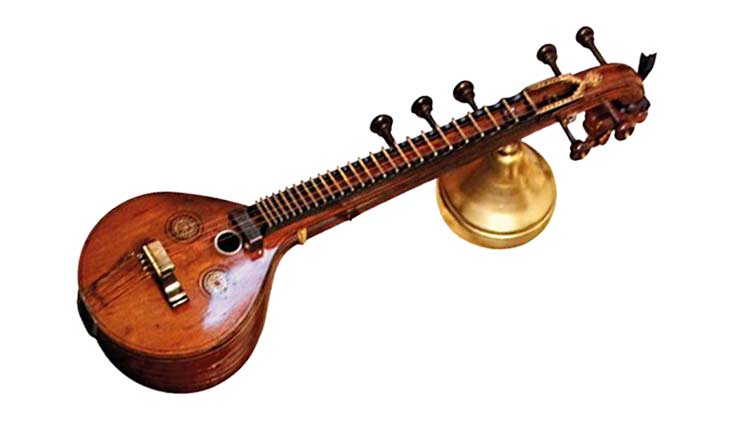 The rich and resonant sounds of the Vīņā enthrall every music lover. Often simply referred to as a lute, this magical instrument carries a hallowed tradition. The Vīņā bears the distinction of being a truly Vedic era instrument predating what has come to be known as the classical era of music in the Indic heritage. This article lists several important references to the Vīņā in the Vedic Sanskrit literature. One may note that the Vedic Sanskrit texts are referring to the Vedic times as opposed to the more popular classical Sanskrit tradition that has flourished since the Mahābhārata times.

The R̥gveda Samhitā mantra verses do not directly mention the Vīņā. Nevertheless, these Rik mantras are rendered in the SāmaVeda for intonated vocalization. This stylized singing is better known as Sāma-gāna and can be best accompanied or represented by the Vīņā. The relationship of SāmaVeda, the Vīņā and the goddess of arts and learning, Saraswati, has been hailed as one of the foundations of musicology in the Indic heritage. It is believed that goddess Saraswati inspires Sāma-gāna through her Vīņā, and thus every aspiring Vīņā player must have the divine blessings of Saraswati.

The Vedic sage Yājñavalkya takes the example of a Vīņā in Brihadāraņyaka Upanishad to hone in on a point that particular notes have no separate existence from the general note. Referring to the Vīņā as an example, the sage implies that particular knowledge of the world in waking, dream or sleep has no validity of its own, separate from the intelligence of Brahman (God) who pervades this world. The erudite seer cites the same verse twice as mentioned in separate chapters: 2.4.9 and 4.5.10 of this remarkable treatise.

Sage Yājñavalkya further elaborates on the vocal excellence of Sāma-gāna and its instrumental rendition using the Vīņā in the smriti text on sacred laws of Vedic times (Yājñavalkya Smriti 3.4.112 and 115 respectively). Verse 112 promises that mental immersion while singing the correctly intonated songs of Sāma-gāna brings about the highest state of liberation into godhood. Whereas verse 115 affirms that excelling with the Vīņā using expertise of the swara (note),  jāti (type of melodic mode) and tāla (rhythm) to create soulful music leads to liberation without the attendant strain of rigorous yogic or mystic disciplines. Herein, the great seer is clearly mentioning the use of jāti (18 types in total) that are used to evoke aesthetically mesmerizing melodic states of devotion (rasa) in the listener. It is clear from this verse that the thematic combination of note, melodic interlude and rhythm as in a rāga were all very well practiced in Vedic times simultaneously with sublime chanting and singing of Sāma-gāna compositions from Sāmaveda.

Pupils of Indian classical music recognize Sāmaveda to be the source of music in the Vedic Indic heritage. The hymns of R̥gveda are known to be exquisite offerings to the gods through the Vāņī or the essence of speech expressing devotional thoughts through the sublime recitation of intonated mantra. However, the essence of these hymns is the musical rendering of those Rik sounds into Sāman by way of either intonated singing or the music of the Vīņā. Here is a classic example of reverse juxtaposition of Sanskrit sounds – Vāņī of R̥gveda is expressed as the Vīņā of Sāmaveda. Sublime expression of the Sāma-gāna through voice or the music of the Vīņā is said to bear the power to replace rites and rituals, and is verily hailed as giving fulfillment to the heart. Sublimation through this celestial music is deemed as a way to moxa or deliverance from the cycle of death and rebirth. The expert chanter of Sāma-gāna as well as the Vīņā maestro are said to repose in the heart brimming with the bliss of the merciful Brahman (Lord).

The nectar of Sāma-gāna through intonated singing is aptly captured by the melodious resonant sounds of the Vīņā like no other musical instrument. There are of course various kinds of Vīņā of notable history, such as Rudra-vīņā, Saraswati-vīņā and the smaller Dhanurvīņā (or the violin). The Saraswati-vīņā has four main strings constructed and placed in a way that allows the creation of distinctive lingering melody (popularly known as gamak) and three strings on the side meant for tāla or rhythm. It is believed that the four main strings represent and cover the entire mantra-vinyāsa or the spread of verses in the four principal Veda (viz. R̥gveda, Yajurveda, Sāmaveda and Atharvaveda). The three drone strings on the side impart rhythm that structures the melodic composition and spurs the momentum. These three strings are said to represent the three primordial powers or shakti-trayam: the power to wish (icchā-shakti), the power to know (jñāna-shakti) and the power to do (kriyā-shakti).

The 24 frets of a Saraswati-vīņā symbolically represent the 24 existent constituent principles (tattwa) of Sāmkhya philosophy which define the domain of evolution in matter (prakriti and vikriti). These frets are arranged with increasing gaps between them symbolically representing the discrete evolutionary steps and direction of creation. The 25th principle or consciousness itself supersedes all frets, and transcendental absorption at the subtlest level of musical immersion is the ultimate boon of playing the Vīņā.