This is a noble effort to safeguard ceremonial expertise for inspiring future generations and bring about peace and prosperity through Vedic fire ceremonies (Homa). Authentic Vedic Homa not only cultivates indigenous knowledge at the source by supporting erudite Vedic priests (Vaidikacharya) of unbroken lineages, but also fructify the benevolent wishes of those supporting the Homa (Yajamana).

Conducting these Homa in India, the land where intricate fire ceremonies have been practised for thousands of years as methods of communion with the celestial world, allows preservation at the source while the benevolent peace effects are directed to communities worldwide. Our nonprofit platform values this offering as an important dharma, related to our cause.

Over 5,000 years ago when Vedic priest-families had migrated from the areas around the drying Saraswati river-beds, a group of Rigveda experts settled in Tamil Nadu in Southern India. Some of those families thereafter settled in the area of the Northern-bound Kaveri river in what is now known as Kadaram-kondan (near Mayavaram).

Their unbroken lineages of progeny have since that time, preserved the authentic techniques and scriptural rituals of Vedic Homa (also known as Yajña). Most of these Vedic priests are nitya-agnihotri, or pious practitioners of daily fire ceremony using a fire that is kept alive continually, who maintain the highest authenticity and Sanskrit scriptural adherence.

A group of such priests, led by an erudite and enlightened Vaidikacharya conduct this series of Homa on behalf of Hansavedas Mission for the highest good without any commercial intent or interest. This is among the highest standard attainable in today’s world with regard to the detailed execution of Vedic Homa based on Rigveda for the greater good. 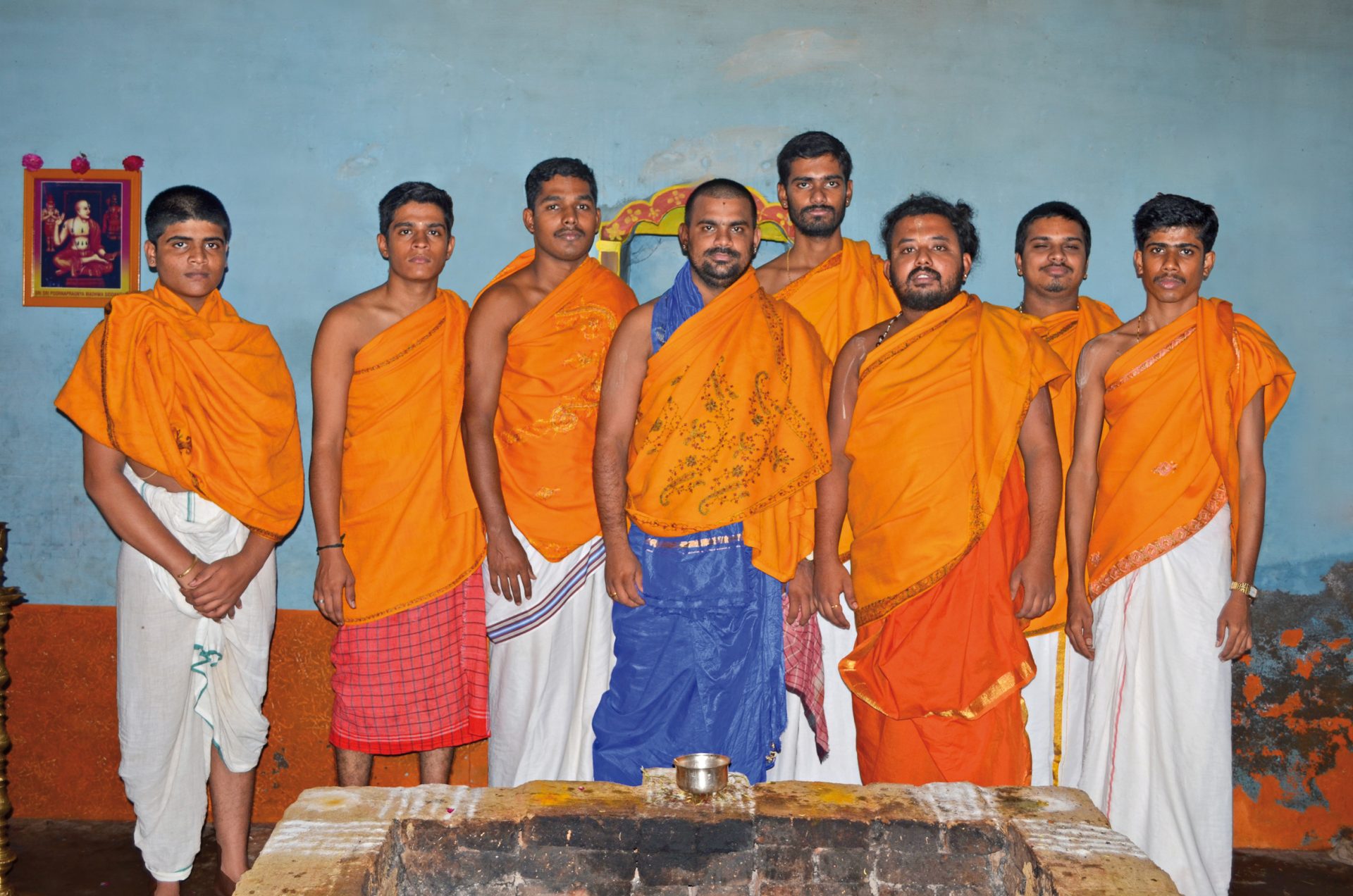 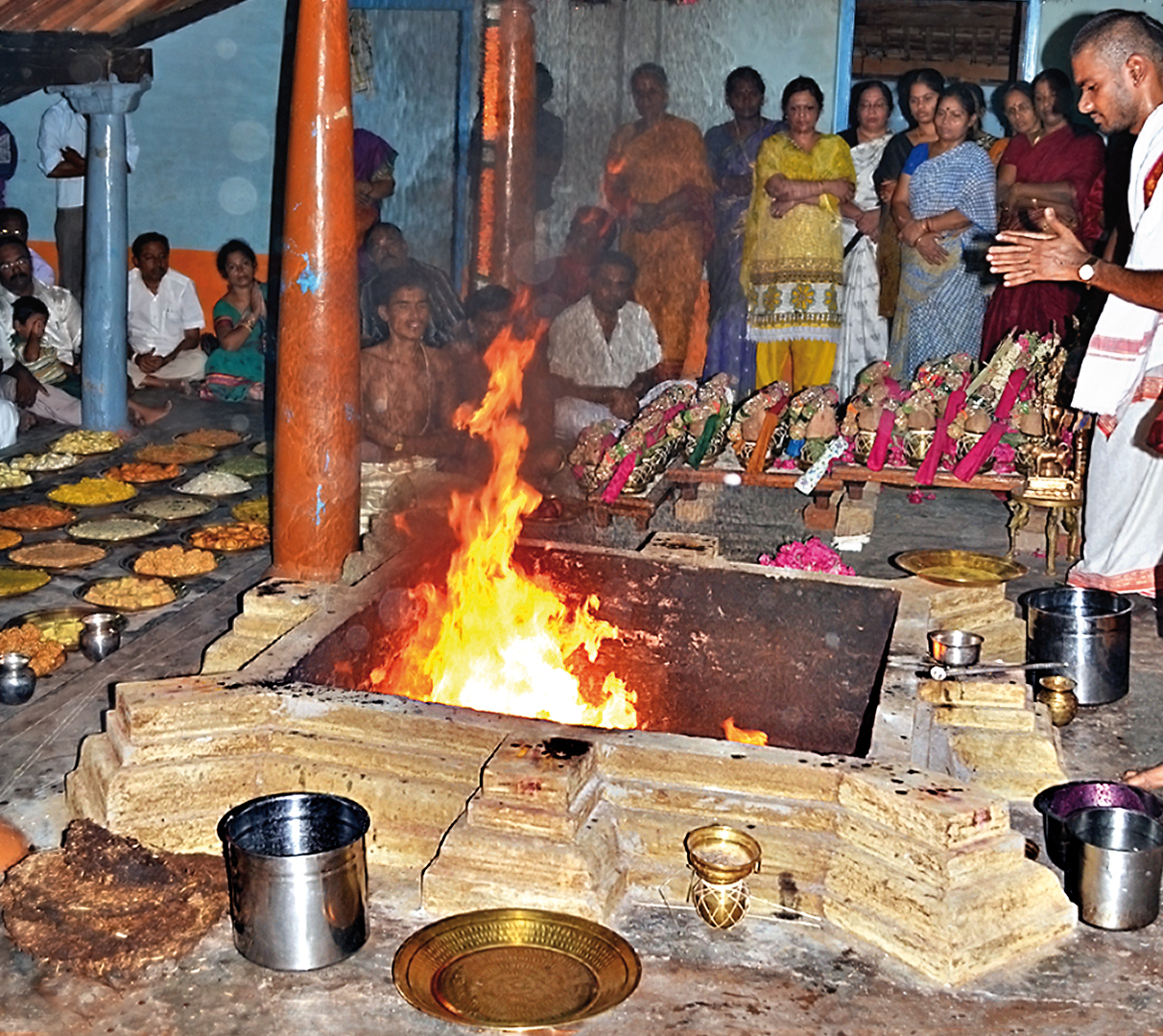 This series of Homa is undertaken based on higher guidance (through meditation) from the ascended Sages, especially Sri Kashyap Rishi, Sri Durvasa Rishi and Sri Bhrigu Rishi. The detailed affirmations or Sankalpa are written in erudite Sanskrit by the monks of our monastic council – and then executed by the team of Vedic priests for initiating the entire fire ceremony at an auspicious time (muhurta). This is a rare blessing for the common good.

For example, the higher guidance reveals the methods combining discrete Ring-mantra from Rigveda to embellish the results of dharmic prosperity, such as in Homa for Kamalātmikā, Sāmrajyalaxmi and Swarnākarshana-bhairava. Such Homa can last 10 days up to a few months depending on the number of priests involved.

With your support we can continue to carry out yearly Vedic fire ceremonies for the sake of peace and prosperity in communities, religious benefit to the sponsoring families, heritage revival by way of sustaining precious knowledge stream, and increasing dharmic virtue of the Hansavedas Matth. Donations support the purchase of the offerings used in the fire ceremonies as well as honorariums (sambhāvana) to the Vedic priests. Sponsors’ donations are used only to cover the actual cost of each fire ceremony; the organization, Self Enquiry Life Fellowship does not keep or take any indirect cost. These Homa are conducted with an affirmation of collective good and not for any particular family or individual cause.