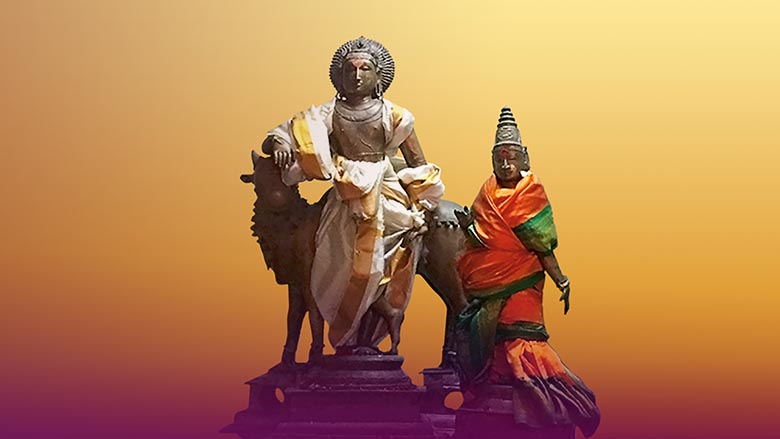 The annual great night of meditation is here upon us, hailed in the Sanskrit tradition as the MahāŚivarātri. Meditating on this special evening and through the night is a practice of alertness meant to supersede the daytime awake state as a memorable experience. In such a vigilant state there exists the possibility of understanding the play of time and timelessness.

This night is dedicated to the Lord of Time, Śiva – who oversees the fivefold cosmic processes of manifestation, preservation, dissolution, obscuration and revelation. Hence, the Lord of Time is also known as the Mahākāleśwara – the one who rules everything that happens in time. The great Lord Śiva is said to be dancing while sounding his drumbeat to the tune of dissolution and this dance is deemed a reality at the subatomic level in this universe. Through his dance of death he is urging us not to waste time and reminding us that time is most precious. He beckons us to utilize time mindfully before facing our death. 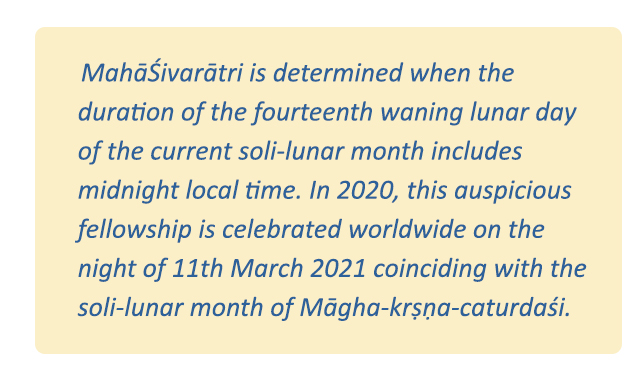 We feel the pressure of timeliness and naturally lean toward abiding by time constraints. If a child likes to eat on time, the parents honour such timeliness and make every effort to feed the child on a timely basis. Our sense of discipline is based on timeliness. The urge to voluntarily act is also timed for maximum momentum – we often invoke an auspicious time before starting any new venture. Likewise, all ceremonial events are planned to commence at an auspicious time and to be completed in a timely manner.

If faith is the father of love, it is also fortified into an unshakable conviction through profound experiences – but only over time. It takes time to heal from a sudden fructification of karma, but time is said to heal all wounds. Meanwhile, internal chatter shames us to reflect upon the waste of time from incessant thoughts. Mind is verily the flow of thoughts juxtaposed, which gives us a sense of time.

Yet mind can be captivated by the sense of timelessness. Mental fluctuations have no spatial existence. They exist only in time and their change is only an emergence of some modification or subsidence to yield to other alterations. Thus tranquility is always experienced as momentous because there is a cessation of fluctuations in the mind. This is how we appreciate what is meant by Lord of Time and what is that state of supreme mental prowess where no fluctuations disturb the Lord’s repose in peace.

Meditation provides us with an opportunity to override the pressures of time through an absorption that defies the very notion of past, present or future. Past, present and future states remain in undistinguished form, because the ‘present’ is connected with its ‘past’ or ‘future’ existence. What is ‘present’ now was ‘future’ at one point of time and shall transit on to the ‘past’ sooner or later. Coming out of a state of meditative absorption makes us understand ourselves much better and realize that the conscious seer within is beyond time. The Lord of Time is indeed that eternal being who is beyond the grip of time and ever alert in a superconscious state.

Lord Śiva is said to be lingotbhava – or emerging from a lingam thereby manifesting from a cylindrical symbol of God. The lingam is a non-iconic representation that can extend as a cylindrical beam of light or be a perfect ellipsoid built with the golden ratio of 1.618 (ratio of the two major axes). In the Sanskrit heritage, the lingam represents a mystical technology connected with fire and light while also representing a space-time capsule of hidden energy.

Our subtle bodies inside us are also lingam-shaped, in particular the soul or the subtle heart situated in the base of the physical heart which is also a symmetrical ellipsoid like a grape but with the dimensions matching the tip of the thumb. The lingam is a symbol of life burgeoning and blossoming in time. The budding embryo inside the uterus is said to be capturing this essence beautifully, wherein the uterus is represented by a yonipiṭha or a womb-like base upon which the life can grow and radiate.

The Sanskrit heritage points to the entry of Śivatattwa (essential principle of Śiva) into the earthly waters in the form of an elongated cylindrical asteroid (lingam) which then created the nucleotide bases upon reacting with water. Thus this time capsule was hailed as the giver of the blueprint of life and genetic foundation.

This is why water is poured over the Śivalingam altars with special incantations of mantra as holy ablutions, and thereafter the collected water is distributed in the palms of devotees for a sipping ritual. The process is often repeated at various altars with waters that are imbued with local herbs. Milk, elixirs and special potions are also poured over these special stone altars during the ablutions. The resultant blessed sips make way for healing – at the ribonucleic acid level!

Such truths are hidden beneath the purview of humankind’s relentless pursuit of excellence. Those who are devoted to the subtler inner search of what is truly auspicious in our lives can develop a devotional understanding of this Śivatattwa with the blessings of the Lord of Time. As such, devotion to truth converts auspiciousness into sanctity. Thus sanctified, one can win back truth from the clutches of time.

May you invoke the auspiciousness of MahāŚivarātri and avail of this rare opportunity to contemplate. May you receive the choicest blessings from the Lord of Time on this special occasion.

With the abounding holy blessings of God and Guru
Swami Vidyadhishananda