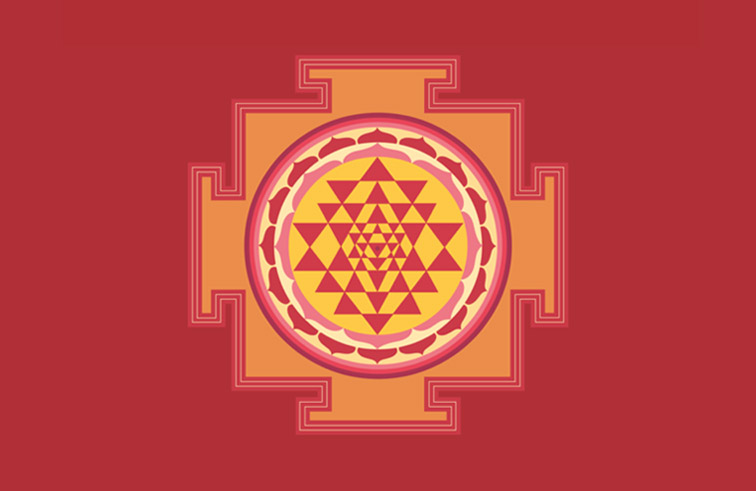 The history of the modern calendar is complex, comprised of several past simplifications and periodic adaptations. There are many pitfalls, and the Julian/Gregorian calendars have been mired with errors and corrections. The ancient system from Vedic antiquity, however, invokes the Sanskrit tradition of soli-lunar calendar calculation to determine the passing of the year and the timing of auspicious transitions. This calculation yields a dynamic calendar with several checkpoints for adjustments already built in (through intricacies of the Ayanāmśa calculations). Modern astronomy confirms the validity and accuracy of this dynamic calendar.

The Sanskrit text named Mahākāla Saṃhitā declares that four nine-night periods, based on the dynamic soli-lunar calendar, are deemed especially auspicious for the worship of the great śakti in veneration of the Divine Mother. Each of these four periods are popularly celebrated as navarātri, which is a literal translation of ‘nine-nights’. Duration of a lunar day and its overlap with the sunrise time determine the duration of each auspicious period. Thus, in rare situations, one navarātri period may span between eight solar days up to ten solar days.

These four nine-night time periods, each starting the day after a New Moon, are celebrated in spiritual traditions by practicing varying degrees of contemplation, introspection, meditation, austerity, rituals, and by launching meaningful ventures. The culmination of this nine-night period ushers in daśamī or the tenth day of the ascending cycle of the Moon. It bears great significance for bringing to fruition a special personal triumph. The navarātri meditation or worship of nine days (and nights) is divided into single days of special prayers related to the splendorous aspects of the Divine Mother.

Based on this Sanskrit verse,

the calculation of the following four auspicious time periods for Pacific Time Zone in the USA are as follows:

Note: even though in Pacific Time Zone nine lunar nights span only eight solar days in July 2019, this may not apply elsewhere outside of the western USA. In this case, seekers should not skip a day and therefore should try to conclude their 10 days of spiritual practice only on 12th July.

Note: even though in Pacific Time Zone nine lunar nights span only eight solar days in October 2019, this may not apply elsewhere outside of the western USA. In this case, seekers should not skip a day and therefore should try to conclude their 10 days of spiritual practice only on 8th October.

Those adhering to a daily routine of spiritual practices (or vows), such as meditation, sublime recitations or community service (sevā) can structure their time equally into ten days of steady participation. One tenth of all spiritual practices is deemed as a correction. Therefore nine days of practices must be followed by the tenth portion of correction in addition to any corrective measures taken during any individual practice session. While evening time or even midnight time meditation is acceptable for the nine nights, the tenth concluding session should ideally be finished before dusk.

If you wish to further study the transition of dates for your own area (local latitude and longitude), feel free to explore these links at your own risk. Even though the original Vedic or Sanskrit significance might not be detailed, the calculations are fairly reliable. Please remember to fill in your local city for correct results on applicable daybreaks or transitions.

A reliable website that is a good resource for relevant celestial events, is also worth studying.

Affirmations based on the calendar

Seekers of truth continually search for higher wisdom in an effort to establish deeper spiritual practices that in turn greatly enrich their lives. Though every moment is momentous for such a seeker, special time periods within our daily calendar are recognized to be especially conducive to our practices and participation. As our biorhythms and diurnal cycles are in synergy with and related to the soli-lunar calendar (Vedic jyotiṣa calculations), so too are the relationships manifested between us and higher worlds during specific time periods.

This transition is based on the rhythms of nature and cycles of time as they relate to the relative movement of celestial bodies, including lunar asterisms and the constellations. The synergy effects make it pertinent that we synchronize our affirmations and routines based on the cosmic time calendar given to us by the extant Sanskrit literature and its calculations. The spiritual resolutions and the attendant disciplines are closely connected with the energy coordinates within our bodies and around us. The soli-lunar calendar maps the diurnal rhythms with respect to luminaries and planets in deep space while the movement of these heavenly bodies retains a relationship with our breath. During one regular breath by a human being, the heavenly bodies move in space by one minute of arc, obviously related to the rotation of earth.

In other words, the soli-lunar calendar is based on a continuous mapping of the relative positions of celestial bodies within our solar system and with reference to the lunar mansions farther out into space from Earth. Here on Earth, according to the geographic coordinates where we are located, this daily prāna (life-force energy) calendar maps the biorhythms influencing us through the cosmic motion of luminaries and planets. Equipped with an understanding of these transitions of key space-time coordinates, we can make affirmations at these auspicious times that become more meaningful.

The Sanskrit conception of elapsed time is an elaborate framework that cyclically connects past efforts with future momentum via the momentous ‘present’ and as the inevitable kāla, or the eater of all. The space-time concepts are further amplified by the nuances of the soli-lunar calendar wherein complicated rhythms of the heavenly bodies are mapped, with respect to both the Sun and the Moon, onto our biorhythms and daily routines. The traditional following of the ‘auspiciousness’ of periods and days is captured in a unit of ‘proper time’ known as a muhurta or two units of 24 minutes, totalling 48 minutes. Sometimes an entire day is considered favourable depending upon the chores and ceremonies that define the range of activities.

While personal meditation practices or mental affirmations are rarely constricted by the dynamic components of the calendar, professional and ceremonial activities related to work and service are brought under a purview of the ‘right time’ for starting in order to gain momentum. There are also the special days based on immensely significant events deemed as divine and awe-inspiring thereby evoking reverence and enumeration by devotees who adore such happenings.

The Sanskrit-based calculation and ethos is based on a cycle of 60 as per the sexagesimal system. Our resting heartbeat of one beat per second is considered to be the rhythm at the root of this system. The number 60 has 12 factors (the total number of constellations in the zodiac that the Sun traverses in a year) and is the smallest number divisible by every number from 1 to 6. Whereas an average of 6 breaths span 24 seconds, 360 breaths usually take 24 minutes or 1/60th of a day, and 21,600 human breaths take 24 hours or a full day. 360° of sky-arc pass over the horizon in one day. 1/60 of 360° = 6° = 360 minutes of arc. Thus 360 breaths cover 360 minutes of arc in space. Therefore, during one breath, the heavenly bodies move in space by one minute of arc. Thus our breathing patterns and heartbeat rhythms are mapped and connected to the macrocosm through the process of evolution.

The Moon covers the same 360° of the sky in one synodic lunar month (the time it takes the moon to go from one new moon to the next) that the Sun covers during one sidereal year (the time it takes the sun to pass through all 12 constellations of the zodiac). The Sun’s 360° cycle is divided into 12 months of 30° each whereas the Moon’s cycle is divided into 30 days of 12° each. A lunar month is thus a mirror image of the solar year. An average soli-lunar year (based on a mean of 365.26 days of the solar sidereal year and 354.37 days of the lunar synodic year) is also about 360 days consisting of 40 nine-day/night periods (navarātri) and 9 forty-day periods (each such 40 day period is a mandala).

Wisdom teachings from the Sanskrit heritage guide the seeker towards a daily meditation practice that transcends the barriers of emotional remnants from performing prescribed duties. Herein, meditation mends the mind by overcoming emotional and physical disturbances. However, the greater virtue of meditation lies in the continuous purification of the chitta (mind, ego and intellect) in the subtle heart. Sanskrit texts define this subtle heart as the soul, which can be seen in deep meditation (seeing without the use of subtle sense organs).

Practising daily mindfulness with breath awareness brings about an understanding of the entrapments from expanding the experience of the world. Anchoring oneself in one’s own daily meditation practices defined by structured techniques manifests the highest purification of internal tendencies and latent impressions lodged in the mind-stuff (chitta-suddhi). Thereafter, a pure-hearted mind beholds the ultimate knowledge or realization of being that transcends subtle feelings and the thoughtless void. While the journey is outlined clearly in Sanskrit, it is helpful to know that our affirmations towards the goal become more meaningful when we synchronize them closely with a certain cosmic time-space coordinate based on a proven dynamic calendar from our ancient heritage.

The affirmations, spiritual vows and daily meditation based on this greater synchronization are necessary until living liberation is attained. Those joining the path of inner awakening or just starting on this journey of mindfulness often wonder how the liberated souls or enlightened beings can remain silent for so long or do not get bored without doing something or other. Most who cannot relate to the validity of spiritual discipline and the transcendental states of being attained thereafter may even conceive of God as being occupied with puny activities.

A liberated being has no sense of time to feel bored and moreover by anchoring in the inner silence they become mighty performers and a noble wish in such a case fructifies easily. Such free beings do not cultivate ‘wishful thinking’ or get unnecessarily busy with the world. Virtues cling to them on account of their tranquil mind. If voluntary action (purushakāra) is guided towards a profound meditation practice, a seeker may obtain liberation in a single birth. Such is the promise of Sanskrit wisdom.

A famous Vedanta verse proclaims that our immortal essence or the consciousness cannot be introspected by those who are physically weak (nāyāmātmā balahinena labhya). Thus a mindful seeker considers the gift of a healthy body as the most important support for introspection. Such a seeker serves to heal the earth by understanding that the body is like wet earth (or soil) in subtle balance with oxygen. The oxygenated breath and vibrant cruelty-free food is very much dependent on a clean environment and sustainable living. Thus navarātri is an ideal time to participate in healing the earth through the meditation and worship of the Divine Mother.

A Vedic fire ceremony or Homa as an offering by devotees and aspirants beholds an immense promise of reciprocation. Meditation mass and fellowship services invoking the Divine Mother with her attributes are a good addition to one’s personal meditation routine. An ardent seeker is not focused on personal gains from giving charity and spiritual offerings at temple altars, but is more inclined to share resources through spiritual practices and meditation that is compassionately healing to the earth.

Those who sacrifice for the greater cause have truly understood the core principles and spiritual values that guide our service. It is not enough to seek personal benevolence for oneself from the Divine Mother, but better still to undertake genuine spiritual practices of honouring and serving that elevate our minds and fulfil our hearts without wanting anything in return. After all, a mother wants hardly anything from the child!