Mountain Path of the Himalayan Abode 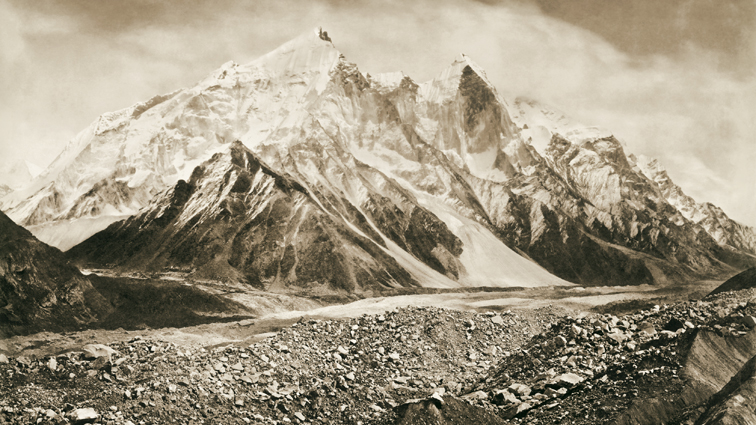 The Himalayan mountains span nearly 3,000 km skewed upward from East to West with three main ranges of mountains acting as a receptacle for a number of glaciers and lakes. It is the longest chain of mountains in the world, spread across a width of nearly 300 km in places. Based on height, the Himalayan ranges can be divided into the lower, middle and high ranges. The lower Himalayan ranges are called as Shivalik mountains in India and have more vegetation and rare medicinal herbs which survive the wintry conditions of lower altitudes.

For most of the year, the ambience of the mountainous terrain is enhanced by a chilled silence. One is not quite ready for the low temperatures in early October as winter begins to creep in even in the lower mountain ranges. At every reflective pause during those long winding trekking routes, one is taken back through the labyrinth of time. For the wandering and wondering trekker, forbidding glaciers, slanting narrow paths by the side of ravines, deep gorges and steep ascents of the middle and high ranges often give way to dense forests in the lower Himalaya.

On the way to remote caves and altars, the treks take one through frequent stops in villages where one can partake of meals with the most unassuming villagers. Hidden and tucked therein amidst the lower and middle range Himalayan peaks are several lesser known sites of India’s myriad cradles of spirituality. One can offer prayers at such sites with little preparation and recognize the silent blessings flowing forth from these living shrines.

These towering high Himalayan mountain ranges bordering their southern evergreen valleys defy theories about the ice age and stone age alike. India has had a continuous unbroken civilization since antiquity, and has been aptly called the cradle of the human race by many renowned authors and travellers. India’s decreasing land borders and the cultural decadence of contemporary times were preceded by eras and periods of thriving Vedic civilizations originating from these Himalayan valleys. As per the records of the Sanskrit literature (Pouranic history and geography), Vedic lineages date back to at least 15,000 years of continuous habitation in the Ganga river planes south of the Shivalik mountains.

The biodiverse habitat of the Himalayan terrain is home to many rare species of animals and plants. The world’s smallest deer and the webbed-footed flying frog are part of the exquisite variety. The famous musk deer stands out as the prize of nature among the tigers, leopards and bears, while exquisite birds and butterflies help beautify the ambience created by the exotic plants.

Rare medicinal herbs colonize the lower Himalaya and swampy areas. Many of the ancient Ayurveda and historical texts of India’s ancient past mention these medicinal plants. One such herb, mruta-sanjivani, revives the stunned or traumatized from succumbing to death and has been mentioned in the Sanskrit historical epic, Ramayana.

Rich minerals and beds of flowers help supplement a nearly unmatched biodiversity. Rivers passing through the mineral formations and flourishing areas of herbs carry potent healing waters down to the lower plains. The flowers are specifically grouped in such a way that neighbouring patches do not overlap. And specific medicinal properties are attributed to these flowering plants. Many larger Himalayan trees are not found to be growing everywhere in the region. Himalayan forests are essentially unmixed in their make-up of vegetation.

Wind, snowfall and melting snow create a unique partitioning by creating exclusive colonies of vegetation. Thus the life cycles of trees, vines and herbs are governed by a different set of circumstances at high altitudes, especially because of the high winds in this rarefied atmosphere. While the seeds of shrubs migrate with melting snow, the seeds of herbs stick to soil and are deposited within discrete pockets. In contrast, the seeds of large trees are very light and easily get wafted to great heights. High winds typical amidst the mountainous terrain carry such seeds to higher peaks, slopes and into rocky recesses. Thus Himalayan slopes and rocky recesses are known to bear tall trees.

The tall Himalayan cedar (devadāru), considered to be a favourite of the gods, grows at higher altitudes and its forest cover makes the surrounding temperatures even cooler. The birch tree, famous for its bark used as writing material, has specially shaped seeds which can be airlifted by high winds. Colonies of birch can therefore be seen afforesting mountain slopes even at high altitudes.

The highest mountains of the world harbour glaciers that represent the largest store of water apart from the polar ice caps. They supply the water flowing in rivers like the Ganga, Sindhu and Brahmaputra. The gangottari glacier (often simplified as gangotri) that feeds the Ganga has been receding year by year over the last decade. Glaciers which regulate the water supply to other rivers are also believed to be retreating each year. Many snow-fed rivers have shown signs of reduced flow and the water level in the lakes and swamps of the Himalayan valleys has been affected too.

Melting glaciers ultimately point to water shortages for millions of inhabitants in the lower valleys as well as affecting the settlements the rivers run through. A scenario beginning with floods and followed by droughts has been discussed as a possibility in the future. If the glaciers melted rapidly, it might first increase the volume of water in rivers and that could bring about flooding. Then decades later this situation could change when the water level in rivers declines and gives way to severe water shortages.

Those living on the flood plains are of course vulnerable to raised water levels, while the droughts that could follow might usher in a drastic environmental shift. It is easy to see why the availability of irrigation affects the livelihood of people living miles away from the source of these Himalayan rivers. One of the most heavily populated regions of the Indian subcontinent, where the Ganga and Brahmaputra conclude their descent into the sea, is more than one thousand miles from the foothills of the Himalayan mountains.

Besides overall climate changes encompassing the receding of glaciers, the rampant denudation and unchecked pollution have severely impacted the ecosystem. Plastic dumps are increasingly visible at most well known pilgrim centres. Musk deer and medicinal herbs are now a rarity kept alive in a few protected pockets. The environmental downslide enveloping the Himalayan wonder has become conspicuous.

Himalaya literally translates as the abode of the snow, but has also been called the heart and soul of the gods (devatātma) by the famous Sanskrit poet Kālidāsa. Well known for its mystical tradition, it is home to a number of yoga lineages. Most of the distinct mountains have names and are revered as entities each embodying a stream of knowledge. Traditionally, a spiritual lineage of masters is connected with a distinct mountain and a particular esoteric heritage.

The vast body of glaciers and lakes represent the sublime knowledge. And the melted snow that forms their waters captures the essence of divine grace bestowed from the mountaintops. Therein, the glaciers are adored as the body of knowledge frozen and preserved for a timed release. The abundant spree of rivers and rivulets represents the streams of knowledge reaching out to the parched lands to quench thirsty souls.

Himalaya is thus considered to be the disseminator of spiritual knowledge and divine inspiration, precipitating the higher knowledge from the yonder abodes for genuine seekers. The mountain villagers view Himalaya with awe as the father of the great shakti and holy mother, Parvati, who is the venerable consort of the auspicious Lord, Shiva.

A swan known as rājahansa (literally king swan), which is hailed as a symbol of transcendence, is said to have been born only at the Manasarovar lake next to Mount Kailash. The white swan is agile and ready to take off at any moment on its yonder flight. The white colour represents spiritual purity and is also symbolic of merging.

A highly realized soul is identified in Sanskrit literature as the Paramahansa or literally “the great swan.” The white swan is fabled to be astutely discriminating while absorbing only the essence, as in merely drinking the milk even when mixed with water. Ready to fly gracefully and float effortlessly, it is able to merge into the being-ness of all. The swan is said to symbolize the Shiva characteristic or auspiciousness.

Even with the encroaching environmental hazards, the yet pristine Himalaya continues to beckon truth seekers and meditators to its abode. Its rarefied atmosphere thins out worldly distractions, and the enchanting holy ambience makes the seeker adapt to the austere terrain.